Setting up an NPS survey and how to use the responses

Community is more about people than anything else and surveys are the best way to find out what the common consensus is.

Written by Priyanshu Anand
Updated over a week ago

NPS or Net Promoter Score is one of the most commonly used research methods for businesses and organizations to understand customer satisfaction, and from that, determine the likelihood of them being active promoters or advocates of your service.

When we put this in terms of community, you can leverage an NPS survey to understand where your community lies in terms of multiple factors like engagement, satisfaction, and advocacy.

This guide, in the process of showing how you can set up an NPS survey within minutes and work with the responses, will also cover some of the important features of setting up automation workflow and working with member cohorts.

Creating a workflow and setting up the trigger

Create a Workflow under the Automation dashboard and give it any name of your choosing. Next, you’ll be asked to set up an automation trigger.

Setting up this trigger is completely subjective - you can decide what condition or what timeline best fits into your community strategy. For the purposes of this example, let’s set up an automation workflow that triggers the survey to go out 30 days after a new member joins the community. 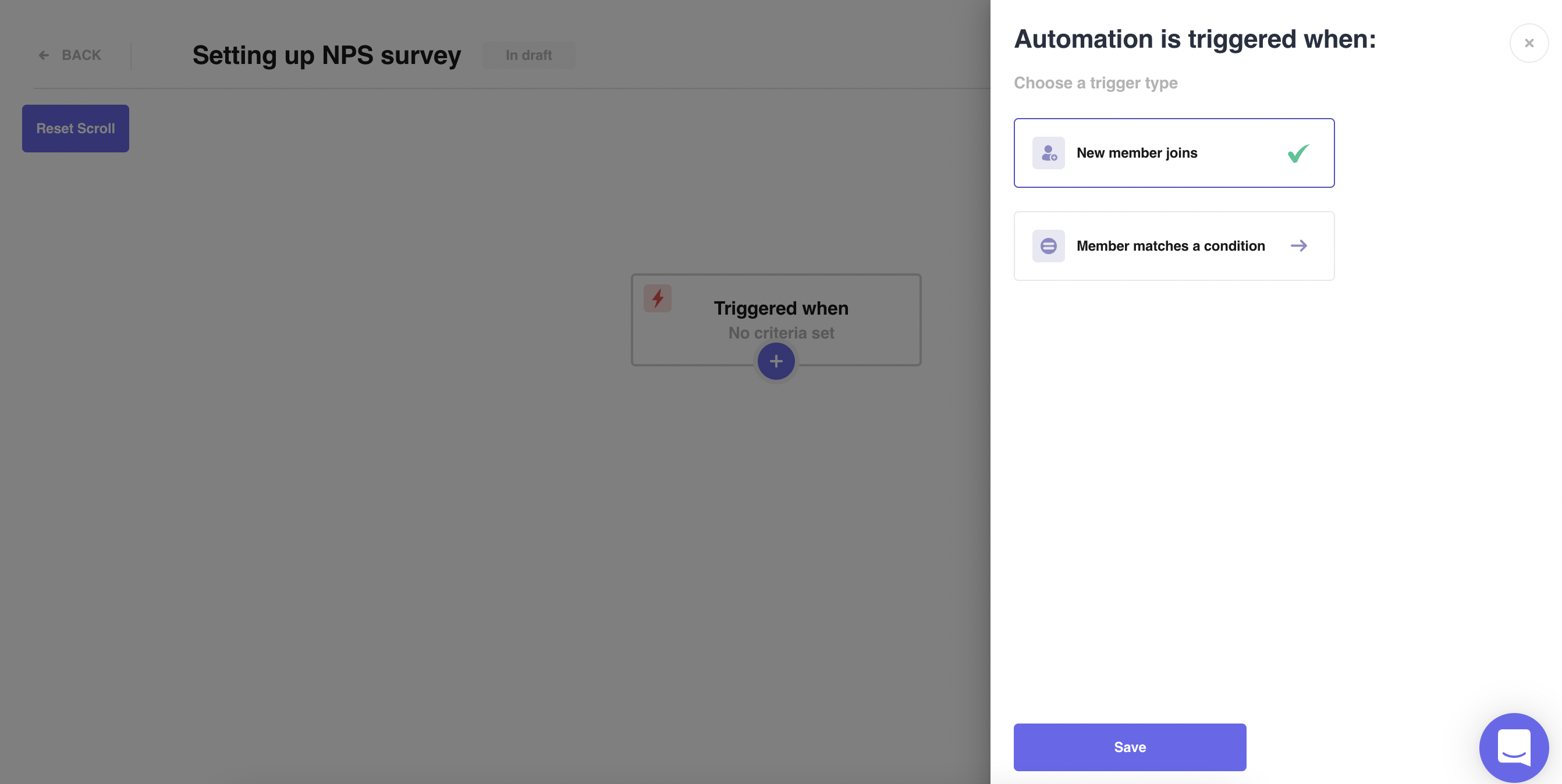 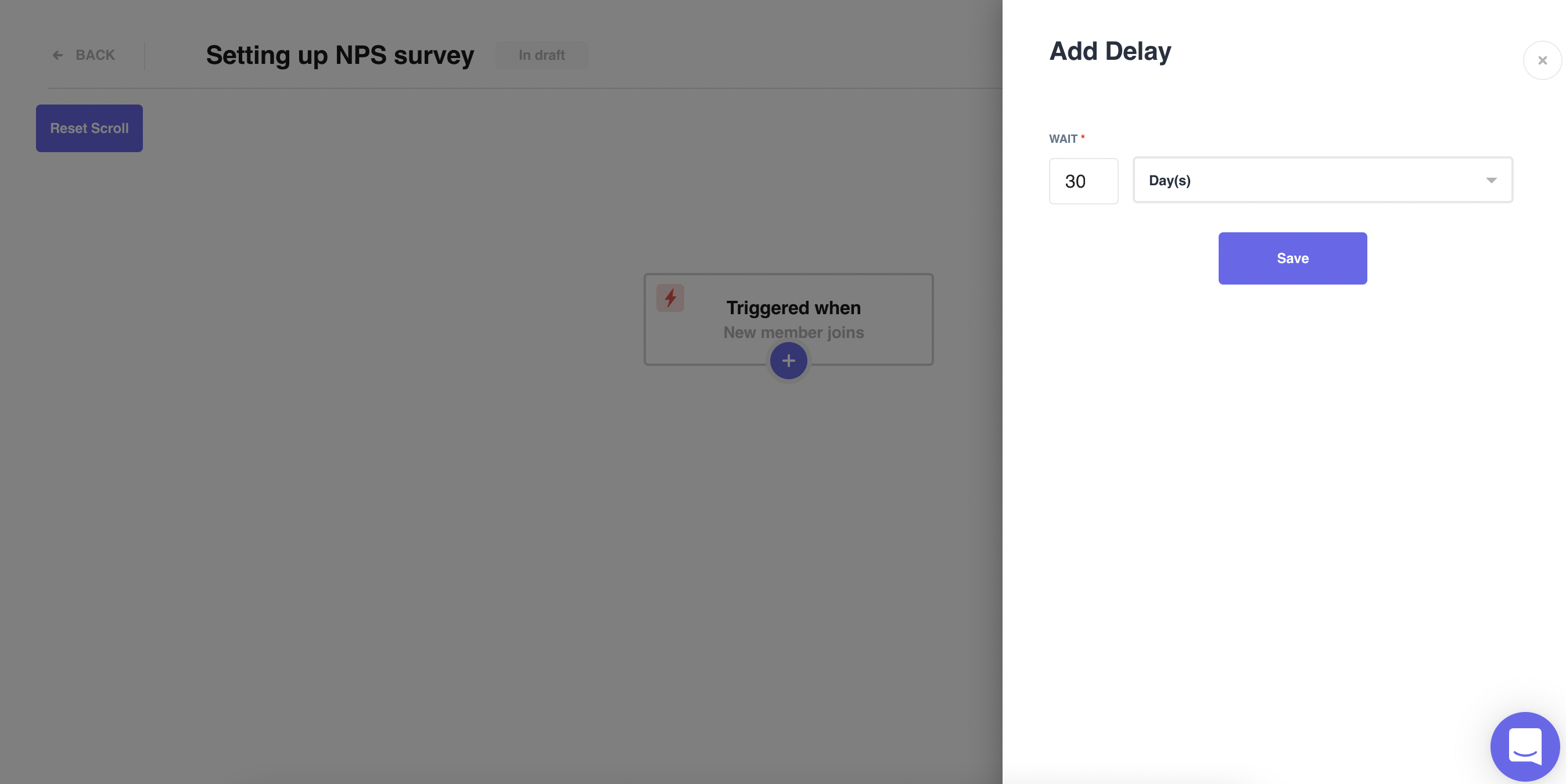 Now that we have a trigger in place, we need to set up the survey by adding the Collect Response - Buttons block from the automation dashboard. These blocks are available for both Slack and Discord, you can choose depending on which platform your community is hosted on.

Once you’ve added this block, you’ll be asked to set up the following -

For an NPS survey, we’ll go ahead and add 10 buttons representing a scale of 1 to 10.

After you hit save, your workflow will look something like this -

You’ve set up a response action to get a response on a scale of 1 to 10, but you can still go for a more personalized touch to this by digging deeper. This is where the Collect Response - Free Text feature can come in handy.

📌 Note: An NPS survey typically divided respondants into 3 groups - Detractors, Passives, and Promoters. Any response from 1 - 6 can be considered a Detractor, members responding with 7 or 8 are Passives, and responders saying 9 or 10 are Promoters. Keeping this in mind, the action you set up for each response bucket should also be different.

For someone responding with a rating of 1 to 6, you would want to know what they disliked about the community and what can be improved. So, we’ll set up a Collect Response - Free Text block asking for suggestions.

Similarly, you can set it up all the buttons till 6.

Respondants saying 7 or 8 are Passives and therefore you should send them a different message than the one you sent to Detractors. Passives are members who most likely enjoy being a part of the community but are not completely satisfied with it. Therefore, it makes sense to ask them what they liked most about the community and what are the things that can be improved.

For buttons 7 and 8, you can set up a free text response with a different prompt or question.

For the Promoters, you don’t really need to ask for feedback but it’s entirely your choice. You can set up response texts for them as well asking what are the things they liked the most. Otherwise, you can directly send them a Direct Message, expressing gratitude for their presence or just saying that you’re glad to hear that they’re thoroughly enjoying their experience in the community.

How to use the NPS survey responses

The responses you receive will be accessible from Filters under the Members Dashboard. Under Add Filter, the last option you’ll see is Survey Results. All the surveys that you’ve ever conducted will be available under this section. 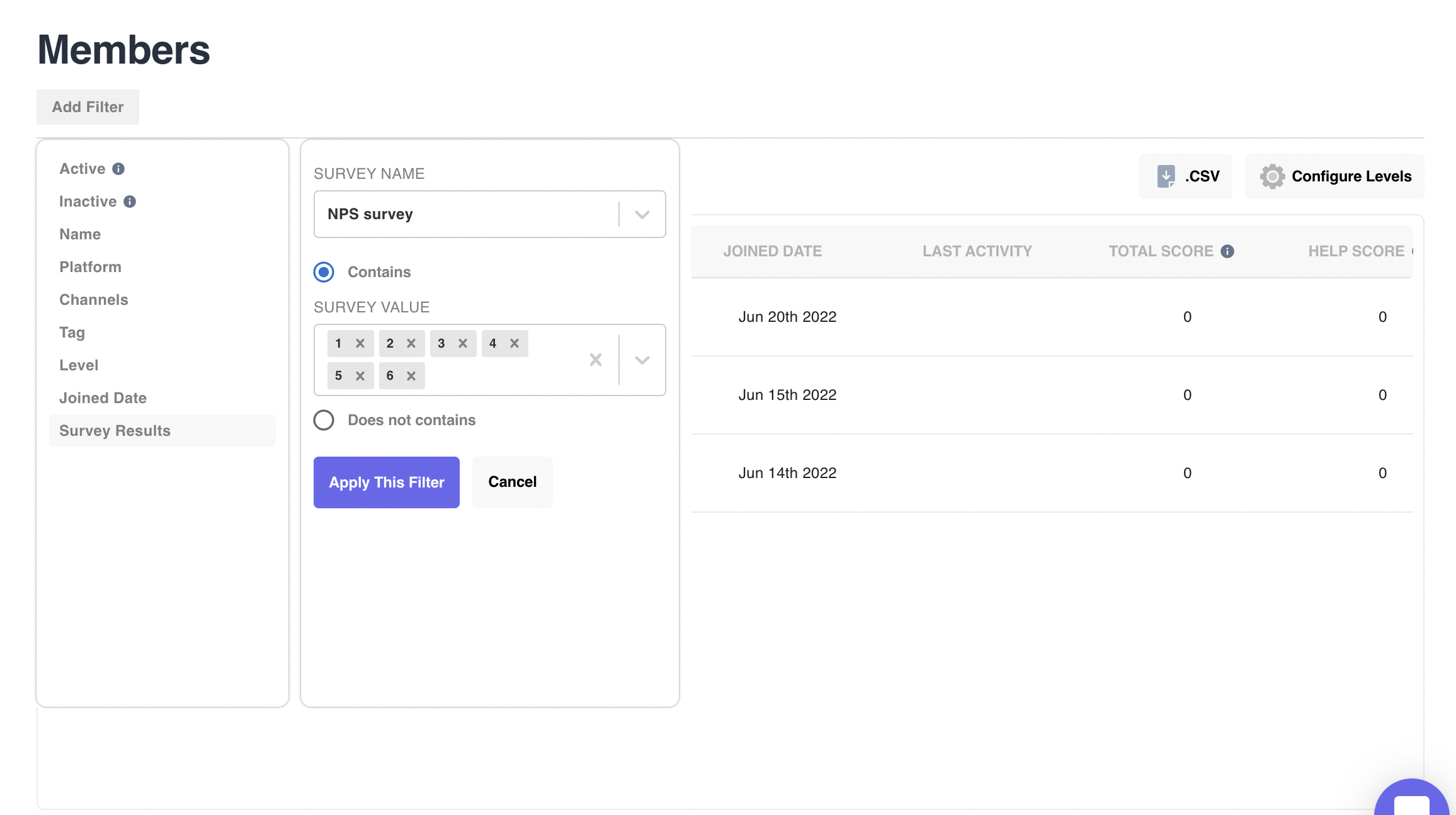 💡 Tip: Now that you know how to use survey responses, you can use that to send personalized messages. You can tag all the Detractors with a tag of the same name and use that filter in automation workflow or even for sending targeted bulk messages. This can help you not only keep track of your Net Promoter Score but also improve it over time.