All Collections
Using Automation to create workflows
How does a community member enter and exit an automation workflow?

How does a community member enter and exit an automation workflow?

Understand the logic behind how the automation filters and conditions work to accurately create workflows.

Written by Karthik Krishna Pandi
Updated over a week ago

Setting up an automation workflow requires adding a trigger condition that dictates or governs which members enter (or are eligible to enter) the workflow.

When does a member enter a workflow?

Suppose you want to reactivate top contributors in your community. For this workflow - you will set the entry condition to target members who are Level 3 contributors and have been Inactive in the Last 7 days.

When you activate this workflow -

Since there are two conditions here, both will need to be satisfied i.e. only if a member who entered Level 3 and became inactive within a week prior to the workflow being activated, will enter into this workflow.

Suppose you want to tag members who became part of (or joined) a channel in your community. For this workflow - your entry condition will only include a filter for a specific channel.

When you activate this workflow -

Can a member enter a workflow more than once?

Unfortunately, no. A member can only enter a workflow once even if they match a condition more than once i.e. after exiting a workflow. So, once a member exits, they cannot be pushed back into the same workflow.

If you wish for a member to enter the same/similar workflow, you can create another automation for the same.

When does a member exit a workflow?

Exit (just like entry) is also a one-time action performed on a member. An exit criterion is when a member does not match any conditions defined in the workflow after entering it and therefore is automatically exited from the workflow.

Say you've set up an automation to try and nudge members towards activation/engagement. The condition that you've set will target members who are yet to interact in the community since they've joined.

How you do this is by setting the trigger to when a new member joins, waiting for a day, and then adding a split condition to check if they have posted a message or not. 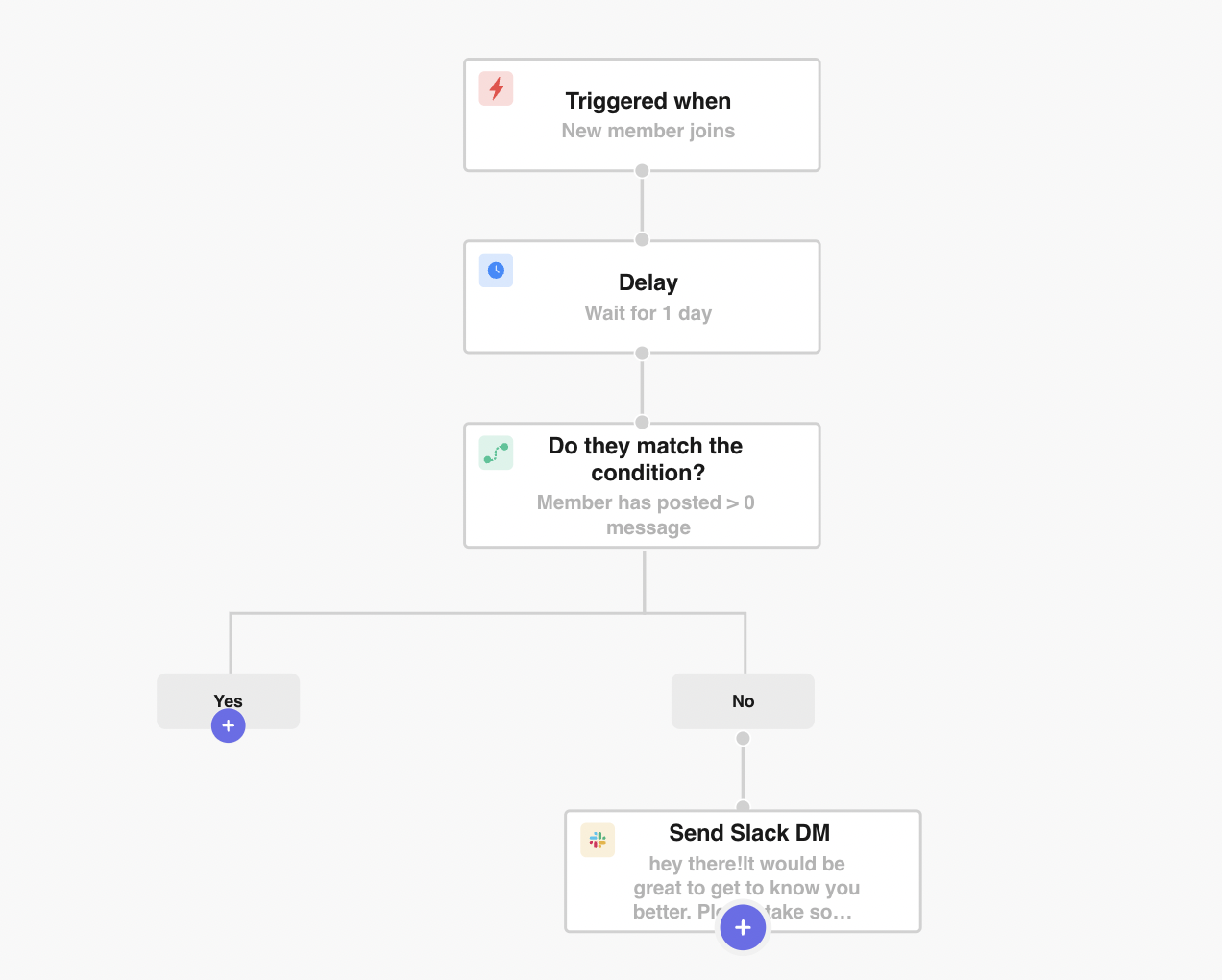 Here, if a member is yet to post a message, they get a DM asking to introduce themselves to the community.

If the member already has posted a message, they get exited from the workflow and won't be entered again.

Another way to exit a workflow is by completing it. So, even in the first case, after a member receives a DM asking them to engage, there are no more blocks left to traverse in the workflow i.e. the member has reached the end. These members too will be exited and won't be entered into the workflow again.